Vault Wholesale has been presented with a rare opportunity to acquire museum quality specimens of crystalline gold and gold nuggets.  We have been contacted to help a 78 year-old mining geologist monetize his collection of gold specimens that he collected over a lifetime of endeavor.  His collection includes beautiful gold specimens from historic mining districts with a strong emphasis on Nevada localities.  Each piece has provenance of its origin.

What is “Crystalline Gold”?

The answer is technical in nature – as gold rarely forms in masses visible to the naked eye.  But when it does, it can be amazingly beautiful.  It can form sheets (gold leaf), pyramids, cubes (6 sides), octahedrons (8 sides), dodecahedrons (12 sides), and other crystalline shapes up to 48 sides.  Mutations in the crystalline form can be attributed to the Spinel-Law Twins, named after the mineral Spinel.  Simply put, a crystal can form a twin of itself and mutate into very interesting forms by intergrowth or other factors.  As a result, the shapes can be simple crystals, wires, ribbons, sheets, cubes, or other exotic shapes.

Each specimen is unique; gold crystallization seldom follows the rules.  If the crystal continues to branch along one major geometric plane, it is called ‘Dendritic’, much like a leaf or fern.  However, the dendritic nature can move in three dimensions to make anything from thin delicate fans to thick crystalline forms.  Sometimes gold develops a ‘Hoppered’ form – which is a unique formation that resembles hollow-cubes.  ‘Striated’ gold has well defined parallel grooves on the crystal face.  Patterns can repeat and create ‘Chevron’ crystals.

Most of the crystalline gold is fragile relative to Mother Nature.  Gold is soft, yet malleable.  Once a piece of gold is weathered and eroded free from the grip of the host material, continued movement tends to batter the crystal into a non-recognizable mass.  Once a crystal enters a fluvial system (stream or river), the constant tumbling and pounding it suffers from movement of itself or the rocks it encounters beats it into a rounded mass commonly termed a ‘Nugget’.  Simply, every nugget used to be a piece of crystalline gold of some shape or fashion.

Crystalline gold is unique and found very close to the source of where it formed.  Most mines do not have crystalline gold (other than microcrystalline gold).  Additionally, when mines do have visible gold, the time and expense of stopping the process to save these rarities is not a part of the equation.  When mines do have visible gold, they maintain an armed security force to prevent the miners from stopping work and collecting a few pieces to take home.  The practice of ‘highgrading’ (stealthily snatching specimens from a mine by its employees) is taken seriously and most mines have significant systems in place to deter and prevent this practice.  Consequently, the collection of crystalline gold within an active mine is extremely rare today.

Not surprising, most collectors want to know exactly from where their specimen originated; the provenance is important to enhance value.  Equally important, is not divulging the origin of the specimen.   Many prospectors and gold seekers return to the same area until the locale has been exhausted.  Because signs and/or fences are weak deterrents to claim-jumpers and trespassers seeking an opportunity (at someone else’s expense), it is only after depletion or a radical change in condition will the prudent prospector divulge where the gold was found.  Intuitively, this practice makes sense; however, the collector wants to know exactly what is in his collection.  Once a location has been mined, the odds of a trespassing claim-jumper successfully finding or extracting gold while nobody notices has been significantly diminished.

Unfortunately, many of the famous localities do not have many, if any, surviving specimens available.

Specimen from some of the more famous ‘original’ gold rush towns in Nevada, such as Gold Hill (1858) – adjacent to the famous Comstock Lode of Virginia City (1859), Aurora (1860), Goldfield (1902), Bullfrog/Rhyolite (1904) and Seven Troughs (1907), are very difficult to obtain and are extremely rare and are highly prized by collectors.  Round Mountain, discovered in 1906, is the source of a limited amount of exquisite gold specimens and is currently being mined via open pit.

The collection that is in the early phase of monetization via Vault Wholesale represents the efforts of the Chief Geologist for the most profitable gold mine in North America of the 1980’s and 1990’s.  Because of his role and expertise, he was able to personally collect, trade, and purchase pieces not available via normal methods.  He personally collected the pieces in his collection from places off-limits to collectors.  He often cherry-picked pieces out of collections destined to ultimately end up as gold bars or gold coins.  He discovered ‘nugget patches’ and was able to trade specimens he found for specimens from other locales.  The man is well respected for his ability and expertise and, significant to collectors, he has notes regarding the provenance of his entire collection.

Parts of the collection in the first round of liquidation includes pieces from several places across Nevada including: Round Mountain Mine, Rye Patch District, Imlay Canyon District, Ten-Mile District, Central District, Jumbo District, Dutchman Mine, and several ‘secret’ locations within Humboldt County where gold can still be recovered.  Most of the gold had been professionally cleaned to illustrate the beauty of natural gold.  It is a rare opportunity to get the gold in its natural form – before being melted and poured into boring bars and/or common coins.

These are some of the actual Crystalline Gold and Gold Nuggets being offered as part of the collection. The collection contains over 11 oz of nuggets and around 13 oz of crystalline gold.
Please note: the $5 Gold Half Eagle is shown for scale only and is not included in the collection. 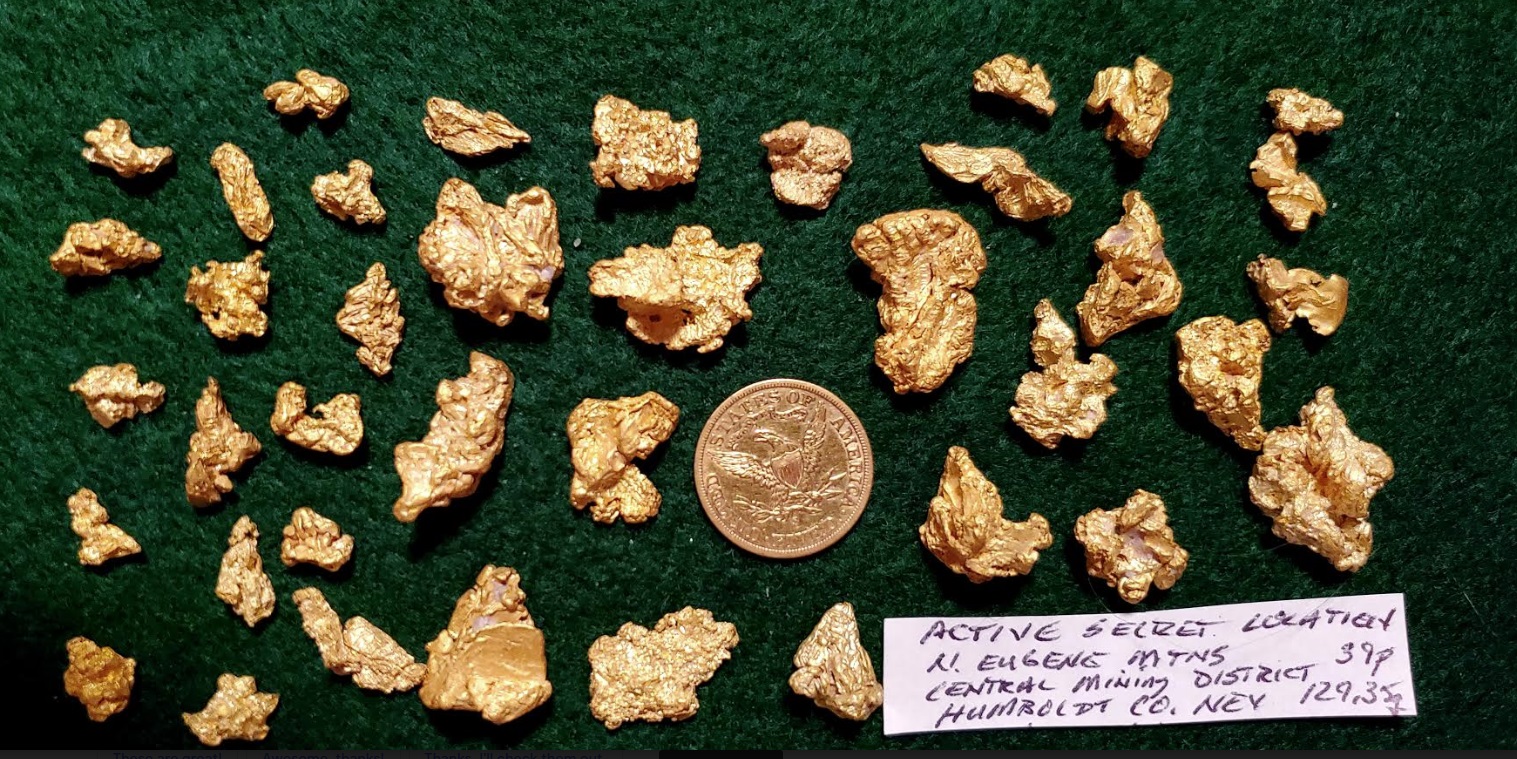 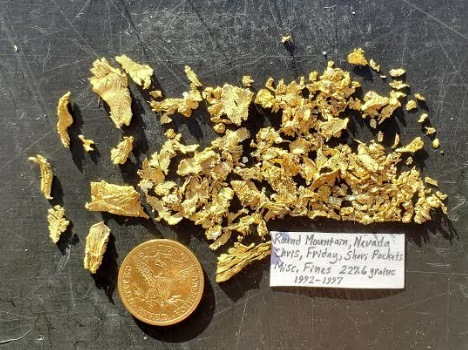 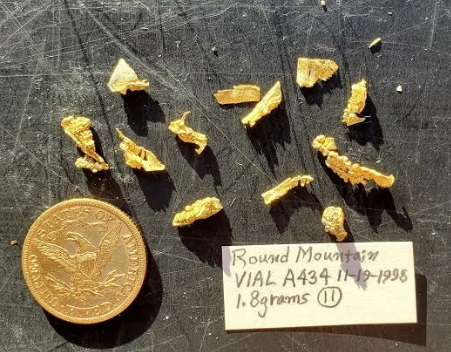 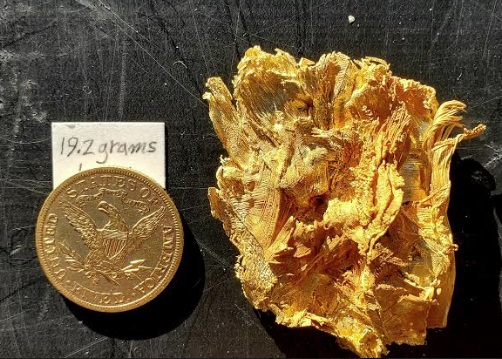 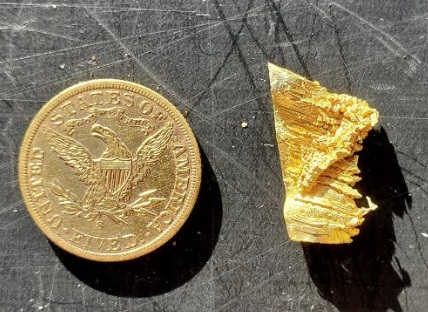 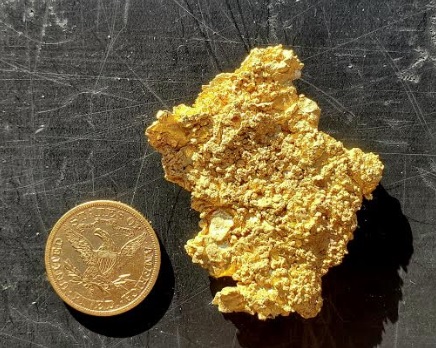